The idea behind the event was to do a day-long workshop event to introduce the concept of physiological computing to a novice audience from a diverse range of backgrounds.  We decided to do a couple of short presentations and then to split participants into three groups to experience a number of demos followed by discussion – and we enlisted our friend Dr. Jen Allanson to pitch in with ideas and to help out on the day.  After much discussion, we went with three demos, all of which were built around gaming because we thought gaming was the best introduction to the area.  One demo involved simultaneous capture of movement and heart/respiration rate during Wii gameplay and a second focused on autonomic responses to a racing game running on a PlayStation.  The third demo was the Star Wars Force Trainer game, which is a simple BCI using a Neurosky EEG sensor. 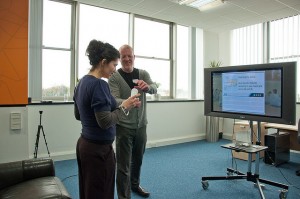 The event took place on the 29th Feb.  To my relief, we got a decent turnout and so the next challenge was how to introduce the area in a digestible way. Both Kiel and I did our talks, but I felt people only really “got” the idea when they saw live signals during gaming activity or played with the BCI.  The latter was wildly popular because it is a “fun” application – what was very interesting was assessing the level of gullibility or scepticism about the BCI concept from each person and comparing strategies for making the system work.  In my case, I found jaw clenching to make the most effective way to control the floating ball, but everyone seemed to have a different approach.  You can see some pictures from the event here and here.  In the afternoon, we discussed a variety of potential applications and issues, from biofeedback for salespeople to devices to engender empathy for the homeless. 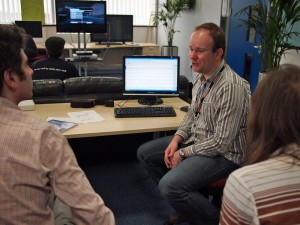 It was a fun and exhausting day. What really made the event work from my own selfish perspective was the opportunity to test ideas with a completely different audience than the usual suspects on the academic circuit. We talked to designers, artists and assorted technologists who were more-or-less completely new to the ideas behind physiological computing.  It was refreshing to have different kinds of conversations about what are (for us) very familiar topics.  Also, being a somewhat staid and conservative academic, I’m unused to people wanting to jump in and build applications without doing at least three years worth of research first – so it was a relatively new exercise (for me) to think about system development in those turbo-charged terms.  Finally, with respect to sensors and measures, I’m terribly spoiled in our lab in that we have access to a lot of apparatus and generally work at the basic research stage where you don’t need to worry too much about real-world constraints.  Thinking about physiological computing as it would work in the field at the moment (as we did during our discussions at Body Lab) meant to conceive of systems that would use robust ambulatory sensors but yield data that was sufficiently sensitive to control a biocybernetic loop.  This is a tough balance to pull off. 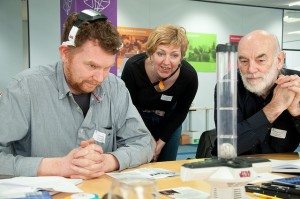 All in all, it was a great learning experience and perhaps we’ll get a chance to do something similar again.