So follow us across the threshold if you will and prepare to learn more about the origins of the biocybernetic loop and its use at NASA along with its  future in research and industry.
END_OF_DOCUMENT_TOKEN_TO_BE_REPLACED

Stelarc, the famous performance artist known for his work on manipulating the human body and cybernetics, visited the Foundation for Art and Creative Technology (FACT), based in Liverpool, earlier this month to talk about his recent projects. To our good fortune we managed to land an interview with Stelarc in order to discuss the intersection between his work and the field of Physiological Computing. 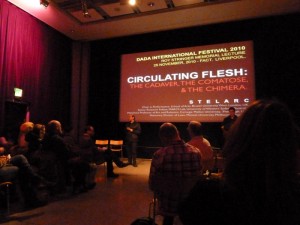 "Circulating Flesh: The Cadaver, The Comatose & The Chimera" a talk by Stelarc at FACT