Well that was a disappointment. In the end Nintendo decided against demonstrating the Wii Vitality at this year’s E3. A representative of the company stated that the Vitality was a no-show because Nintendo did not believe the event was a suitable environment for the product. Disappointing but given their press event was jam packed with a number of AAA games and a new portable it was understandable. However with the Vitality aimed for a late 2010 release it doesn’t give Nintendo much time to create a buzz around a product that frankly has none. In actuality I was surprised that Nintendo didn’t use their recent endorsement deal with the American Heart Association to hype Vitality pre E3. While the product is currently being marketed towards mental health (i.e. stress management), rather than physical health which the AHA endorsement concerns, Nintendo could of easily used the event as part of a broader health platform and so make better use of the publicity the endorsement deal attracted.

While Nintendo continues to leave us in the dark about their entry into the wellbeing market, it was rather out of the blue to see Ubisoft announce their own finished “Vitality” like product at E3 called Innergy. Using the same technology as the Vitality (i.e. a pulse oximeter), Innergy’s aim is to teach players stress relaxation techniques via biofeedback. This is a technique in which a person’s hidden physiology is visualised in order to help them attain a degree of conscious control.

The Ubisoft demo revealed two aspects of Innergy’s gameplay. The first was a method of documenting (a diary) all the different stressors in the player’s life. From this the game rates the player’s current level of stress and creates a personalised stress management training regime. The diary is also used to chart the player’s progress in managing their stress levels as they learn new stress management techniques. The diary teases out the stressors in the player’s life using a series of questions. Questions are presented in the form of a likert scale (e.g. on a scale of 1-5 rate how often you become stressed during work where 1 = never and 5 = very often) but instead of having the player answer by selecting a number from the scale each value is represented by a different coloured marker. The player uses these markers to colour in a cartoon face which represents their avatar, the mismash of colours used on their avatar represents their answer. Presumably this is to make the diary more interesting from a gameplay perspective, being less formal, but I can’t see the value in providing this type of input as their answer will still be rated within the confines of the likert scale. This system just makes things needlessly messy. 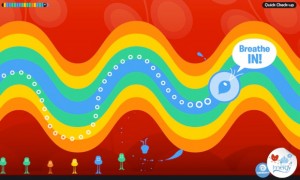 Figure 1 Screenshot of a breathing relaxation game in Innergy.

The second aspect of gameplay was a breathing relaxation game (see Figure 1, videos of the game in action can be found here and here). A blue blob moves across the screen from left to right against a wavy background of colours. The wavy background represents the ideal breathing pattern for the exercise. The blobs vertical motion is controlled by the player’s breathing pattern (i.e. on inhalation the blob travels upwards according to the magnitude of air breathed in and vice versa). The player’s goal is replicate the pattern they see on screen by keeping the blob inside the blue wave as much as possible. In doing so this exercise teaches the player to breath at a slow pace.

The following section is by Dr. Stephen Fairclough

From the physiological point of view, the Innergy system promotes a pattern of respiration with three components:  slow frequency (low number of breaths per minute), deep breathing (larger breathing magnitude) and consistency (regular breathing rhythm).  This pattern is associated with a range of relaxation techniques from yogic breathing to countermeasures for panic attacks.  This kind of slow, controlled breathing is associated with the parasympathetic branch of the autonomic nervous system.  Basically, the autonomic nervous system has two branches: the sympathetic nervous system (SNS) associated with alertness, excitement, fear, anxiety, and the parasympathetic branch (PNS), which is associated rest, recuperation and eating.  The SNS speeds up physiological activation and promotes catabolic (energy-consuming) activity.  The PNS has the opposite effect.  By breathing slowly, deeply and regularly, the body promotes PNS activity which slows down the heart rate via an association between parameters related to breathing and the pacemaker of the heart that’s mediated by the vagus nerve.

It is true that physiological markers of vagal (PNS) activity have a negative link to stress vulnerability and reactivity (i.e. lower levels of PNS = higher stress and vice versa).  This stands to reason because PNS activity is associated with rest and recuperation, both of which are incompatible with high levels of stress.  However, a person who promotes PNS activity via slow breathing during stress should also show lower levels of physiological activation, which is good news for health in the long-term.  Most importantly, this type of breathing makes people feel relaxed and drowsy because of the link between PNS and rest.

So far, so good.  Let’s examine the terms used by the developers of the Innergy system – the concept of ‘cardiac coherence’ sounds like a good thing but I have no idea what it means.  The cardiac system is generally very coherent in terms of morphology of the ECG signal and rhythm of the heart.  Furthermore, breathing and heart rate are strongly connected at a physiological level whether a person is fast asleep or in the grip of a panic attack.  I have no doubt that the Innergy system has the potential to promote physiological and psychological wellbeing as claimed by the developer.  What I am less certain about is how well the biofeedback training received on the system will transfer to a real-life situation.  Obviously one could plug in to the Innergy system during times of high stress, but I have the impression that the idea is to promote enhanced self-regulation via exposure to the system.  This may be hard to accomplish in practice.  When people are extremely angry or excited or fearful, it can be very difficult to even breathe deeply, regularly and slowly because the physiological momentum of the nervous system is pulling in the opposite direction.  I’d loved to see the system evaluated in this respect.

I was rather impressed with the level of effort Ubisoft put into making Innergy, its a very stylish product from the visual experience right down to the design of the sensor. Something I wouldn’t expect from Nintendo’s offering given their tendency to incorporate the Mii avatars into such products whose simplicity I find to be very off putting during play.  Though I expect Nintendo will drop the medical look their sensor is currently sporting before Vitality’s release. However from what I’ve seen of Innergy I’m hesitant to call the product an actual game.  While Ubisoft only demonstrated one of no doubt several training exercises what they did show was nothing more than a fancy looking version of your run-of-the-mill biofeedback training exercise. Typically a biofeedback exercise will present the user’s physiological information in a numeric or graphic format (e.g. bar graph) and ask them to manipulate it in order to achieve a set target (e.g. decrease heartbeat rate 10% below the rest state).  Once the objective is achieved the training is over. I don’t see much difference between that and the exercise Ubisoft showed which has the player replicating the breathing pattern displayed on screen, and such a format is not a game (e.g. no intrinsic challenge is present in the software). Now, as Ubisoft developed this product in-conjunction with MindMedia, a company that develops biofeedback training programs (and hardware) the developers may of not looked too far from that companies own series of game like exercises. This would indeed be unfortunate as relaxation has been used before as an novel game mechanic (e.g.  Relax-to-Win, where relaxation controls the player’s speed in a two-player race). Essentially what Ubisoft demonstrated was a fancy graph animation. In order to make a game of the player’s ability to manipulate their physiology a training exercise should at least consider the following: –

One of the most common gameplay mechanics you see relaxation used in biofeedback training exercises is as the speed control in a racing game. This game mechanic has been used in a variety of different ways to provide different stressors. Relax-to-Win relied on a competitive gaming environment with a physical opponent to provide a stressor (i.e. you have to suppress your physical response to losing), BalloonTrip used an audience and CalmPrix (Thought Technology) mapped the player’s level of relaxation to the games difficulty thereby making the game more difficult as they become more relaxed (i.e. training regime crudely adjusts itself to the player’s physiological skill).  While these are only simple games their a step-up from asking the player to manipulate their physiology without providing any intrinsic worth in the action.

Whether Innergy turns out to be more game like or not doesn’t really matter, what I’m curious to know is who is the target audience for this product? By announcing Innergy during their E3 press event it suggests their trying to access the wellbeing market inside the gaming community and despite the lack lustre response during the press event (similar to Wii Vitality’s at lasts year E3), I still imagine there is a profit to be made. What I find puzzling is why are they releasing the product for PC and MAC instead of on a console. The wellbeing market for PC at least is already well established and you can buy similar products to Innergy and Vitality (and better ones at that) right now (see The Journey to Wild Divine). If instead they tried to tap into the console markets, at least on Xbox360 and PS3 they would have absolutely no competition. At the moment the only company acting smart in the way they handle physiological games is EA, whose new heartbeat monitor is suppose to be multi-platform across the consoles (and whose sensor also nicely supports a multitude of different game formats).

So with E3 over are there any lessons Nintendo can take away from Ubisoft’s entry into the wellbeing market? Well, despite Innergy being a pretty slick product, it appears to just be your run-of-a-mill biofeedback training program at its core (although this might change as more of the product is revealed). Essentially if Nintendo wants to make go of the Vitality their going to actually have to make some games (see Pre E3 post) otherwise I don’t see the peripheral going beyond its initial release.

6 thoughts on “Post E3: Without Vitality we draw upon Innergy”